Beards are back…they are even doing beard transplants on Bronx hipsters putting chest hair in formerly wispy faces. I’ve had a beard more or less all my adult life…all I can grow is exactly what Lenin had…but I can grow that in a week. What’s weird is the whole beard color thing. I regularly see guys with apparently authentic dark head hair but their beard runs from black to pure white often through some version of brown or red. 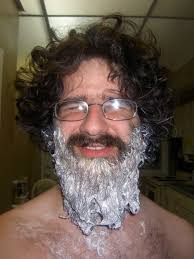 So what’s a guy to do?  If you don’t want to have a premature Santa Clause look you have to head on over to the beard aisle at CVS and get busy with the bead dye. There is typically exactly one choice of bead dye to be had. Just as a side question how many products which might be used by potentially half of the adult population are served by exactly one product? That alone strikes me as weird…is there some kind of beard dye OPEC maintaining a retail monopoly?  Anyway if bead dye is in your future …that’s where this gets weird.

My beard started going really grey in my early 40s.  In spite of the fact that my mother insists that I dye my head hair (I swear I don’t) I started to dye my beard. I have many years wasted in amateur dramatics and I’ve done a fair amount of stage makeup so I perfected a technique which beat the grey back without looking too fake…I hope.  The problem I always had was that I’d go through a vicious cycle of grow the beard, color the beard break out in annoying little sores which I couldn’t get rid of whilst keeping the beard, shave the bead, cure the sore spots….and repeat. I’d itch and worry at the sore spots like an insane person much to the annoyance of my lovely wife who was convinced that I was some flavor of OCD or just plain nuts.

The other day my lovely wife was yelling at me for once again shaving off my bead to fix the OCD induced sores. This time she also jumped online and did some poking around and it turns out that what I had been experiencing is actually far from rare. I’m not nuts I’m allergic. Tons of guys reported similar cycles of irritation and accusations of OCD bead scratching.  A little more poking around revealed an alternate solution. I’ll plug the brand because I think these guys are heroes. It’s called WolfsHead bead dye. It’s essentially a henna based dye which you apply in vanishingly small amounts every day after the shower to subtly and undetectably take out as much of the grey as you want to in a few seconds. No breakouts no, itching no, OCD madness.  I started using it and have never looked back.  You can’t get it in your local pharmacy (no idea why) but it’s readily available on line.

So guys (and I know I have a bunch of guys in my age range who follow my insane ramblings) if this is an issue for you there is a cure…now back to search.

One thought on “The Weirdly Beardly Situation”