I appreciate that the protocol is that nobody reviews a Broadway show until it officially opens…but permit to break with tradition and give you my 2c on the reboot of Hedwig and the Angry Inch starring Neal Patrick Harris which is currently in Previews “Broadway Adjacent” at the Belasco theater New York. 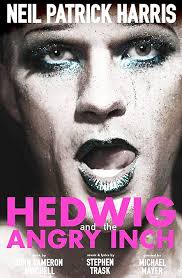 Given that the original run has already sold out and the extended run through the end of June is also pretty much also fully sold I could officially declare the show a heap of garbage and not impact the ticket sale one iota….but I won’t.  The show is brilliant…nothing more or less…just brilliant. We saw what had to be the fourth or fifth night of previews. The show was was technically pretty much perfect, nothing needing apparent work anywhere.  Hedwig is one of my most favorite shows.  I saw the original production maybe three or four times back in the late 90s as it was on the way to cult status. The show is essentially a one man act backed by a four part rock band. I loved it then, I love the new version more. Musically this performance is faster, louder and more punk than the original. Although the original was also pretty punky, it leaned more towards Bowie than the Sex Pistols. This version is straight out punk rock. At a couple of points Hedwig even spits at the audience which in of itself is a very punk throwback idea. The show has updated perhaps ten minutes of content amounting to a dozen or so jokes and most of them work really well. They have added half a song which is related to the new “venue” which doesn’t really work…and imagine may not make it into the post preview version.

The audience cheered every song and seemed to get most the jokes….they missed the “I love a good Scrim Job” line probably because almost nobody outside of the theater would know what a “scrim” is. Clearly a lot of the audience were there for NPH rather than Hedwig, some of the older audience members may well have thought that they were actually in the wrong show…but everyone seemed to enjoy the production none the less.  NPH takes the role on full tilt and absolutely destroys.  He doesn’t chew the scenery, he’s appropriately over the top without being self-indulgent or mawkish. 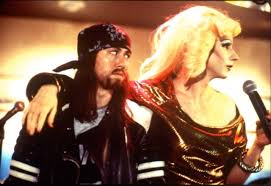 If I could be so bold as to criticize anything I wasn’t completely sold on the performance of his sidekick. She just isn’t that convincing as a guy and the transformation/reveal at the end feels a bit forced. That may not be her fault though, I always thought that part of the original plot was a little patchy.  It’s hard to pull off a funny, camp, dramatic musical and sustain for a full 100 minutes….Rocky Horror falls apart after 20 minutes. These are micro nits which I probably shouldn’t pick at all…and might well be fixed by the time the show opens for real. All in all this is a fabulous powerhouse performance illustrating once again what an amazing talent NPH is. I hear that the creator of the original show is now working on Hedwig II the sequel…I’m not convinced that’s a great idea…but we shall see.