It’s tough to run an airline and the continuing merger between US Airways and American to form the worlds largest (and worst?) airline clearly isn’t helping. Here’s a few “teachable moments” from our recent trip from San Diego to New York’s Newark airport. 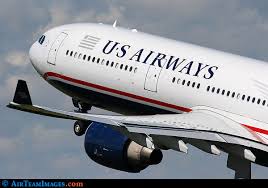 We arrived in Philly in horrible weather hoping to make our connection to Newark. It was delayed and delayed then cancelled and we were reliably informed that there would be no more flights to Newark that day owing to the weather and air traffic problems. The good news was US Air was convinced that they could get us to Laguardia instead and in plenty of time. After what felt like twenty minutes of typing the service rep told me she had stood us by for the 6:05 but we were confirmed onto the 9:15 just in case that didn’t pan out. We had a bag checked and that was (we were told) rerouted to Laguardia accordingly. We jumped back on the shuttle bus (our second trip) and made it to the gate to find we had missed the flight…so we started waiting for the 9:15.

When we arrived (again via shuttle in the pouring rain) to the gate we were informed that we had not infact been confirmed onto the 9:15…in fact we were in limbo. We attempted to get on the 9:15 without success but we were confirmed on to the 10:50. Back to the shuttle! The 10;50 was delayed…and I was concerned about the fate of our bags, so I waited in line for 45 minutes to check with customer service on our bags.  Our bags were confirmed as definitely in Newark…they had left on the flight which had been cancelled but was then reinstated. I pleaded with the customer service person to have them forwarded it to LAguardia or  even better our hotel so it would be there ahead of us…but no go…we had to resolve this in Laguardia.
We finally made it to Laguardia about 1.00 AM having wasted about 6 hours in Philly. The baggage guy assured us our bags should make it to our hotel by some time after lunch the same day.  They didn’t, they in fact arrived some time in the wee small hours the following day over 24 hrs later. Nothing beats arriving exhausted without luggage. Both the online and telephone baggage enquiry services were both unhelpful.
Here’s the teachable moments from that Fiasco
The level of incompetence and evident lack of concern demonstrated at every interaction was disappointing if not surprising.  We were offered neither apology nor any kind of compensation for inconvenience at any point….just another day in the air. Our biggest mistake (aside from flying US Air) was to hold check a bag with a connection through Philadelphia. It’s been so long since I last checked a bag I guess I had forgotten.